My hands unearthed two huge books from the bottom of a parcel. The unexpected weight of the grey literature almost forced me to drop them. Anxiously, but nonetheless scared, I awaited these books in the last weeks. They would help me to face the demons of our troubled German past as well as my fears for the present and future of our increasingly divided society in the US and around the world. 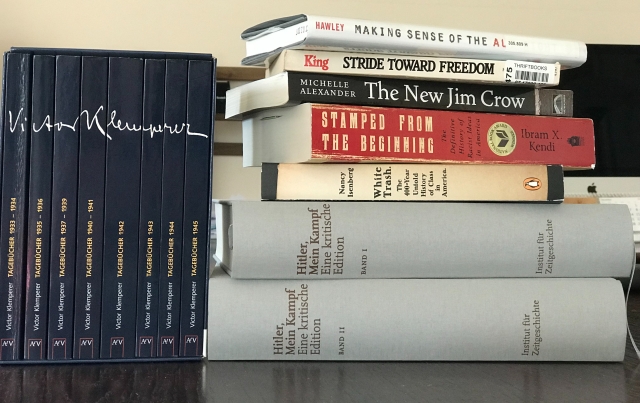 Hitlers „Mein Kampf“ is the ugliest and most hurtful expression of racism and root of crimes against humanity. His evil writing had inspired a whole nation to commence unforeseen brutal actions, bringing death and suffering over generations of Jews and other marginalized people.

Ever since I can remember, the demons of the German past have haunted me. Now I am facing them, trying to explore the history and creation of racism throughout human history. It is this thread I am trying to uncover as part of my doctoral studies.

The critical edition of Hitlers „Mein Kampf“ will be a important and hurtful read as I hope to be a small warning voice in a growing choir of likeminded. Hopefully my research, actions and words will help prevent such crimes ever to happen again.

As I opened the first page of the first volume, my hands were trembling. How will I react to encountering Hitlers ideas for the first time? Which discoveries will haunt my future nightmares? But I knew: Confronting these and other demons, which are rooted in the racial theory of hate and exclusion, is a first important step to hinder tragedies to come. In a politically dense situation like we are facing it in the United States and all around the world, it will be vital to see analogies and name them in order to cast them out.