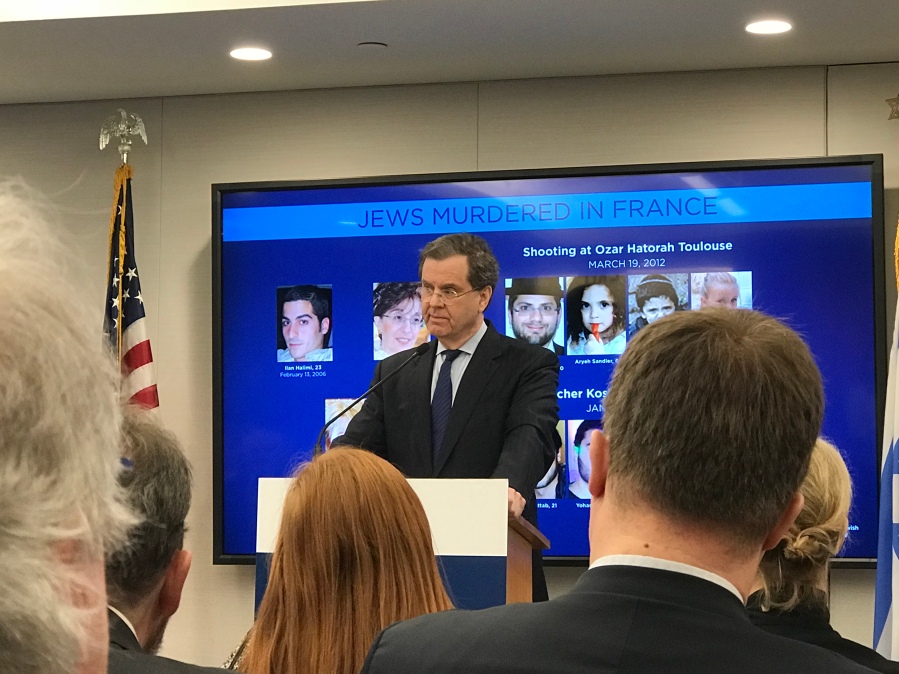 Voices rose around me. Grieving people from all walks of life spoke in one voice. Jews, Protestants, Hindus, Buddhists, Muslims, and Roman Catholics joined in the ancient Psalm 23 and filled the dense air of the meeting room with hope beyond grief.

The Lord is my shepherd; I shall not want.

He maketh me to lie down in green pastures; he leadeth me besides the still waters.

In the midst of preparations for the high holidays of Pesach and Easter, members of the American Jewish Committee (AJC), Consuls from numerous countries, clergy, and friends had gathered in Midtown Manhattan to show solidarity with the Jewish Community by sharing the grief about the assassination of Mireille Knoll. The French Holocaust survivor had been brutally murdered on March 23rd in her apartment in Paris and is the newest victim of antisemitism. 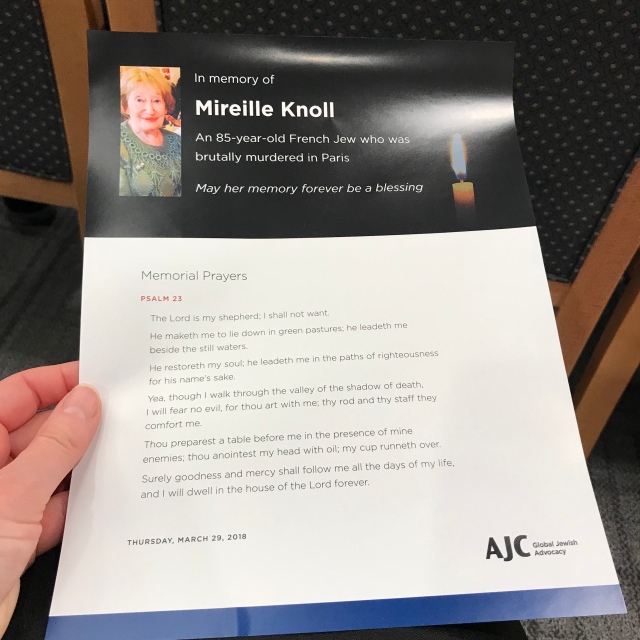 The 85-year old, who suffered Parkinson’s disease, was stabbed to death by two Jihadists. A senseless and brutal end to a life that had been ever so burdensome through the suffering of the Holocaust. Mrs. Mireille Knoll had barely escaped with her life as a ten year old in the Rafle du Vélodrome d’Hiver in Paris in July 1942. Thousands of Jewish women, men, and children had been locked into the Vélodrome d’Hiver to be deported to concentration camps in the East. She returned to France after its liberation and married Mr. Knoll, a Auschwitz survivor. The couple was blessed with two sons. But after the nightmares of the Holocaust she had not been granted a peaceful death, but violence and hatred ended a life too quickly.

He restoreth my soul; he leadeth me in the paths of righteousness for his name´s sake.

Yeah, though I walk through the valley of the shadow of death, I will fear no evil, for thou art with me; thy rod and thy staff they comfort me.

My heart sank as I spoke the old biblical words, which are my Baptismal verses. Yes, Europe is facing one of the greatest challenges since World War II. Antisemitism, racism, exclusion of those, who are different is on the rise. This senseless and brutal death was its newest expression.

Thou preparest a table before me in the presence of mine enemies; thou anointest my head with oil; my cup runneth over.

In their history Jews had to face uncounted enemies. It is like a red thread woven through the countless centuries of the ancient nation. Prosecution, death and murder accompanied their struggle for freedom. In many ways their history and the way they are treated is like a litmus test showing the state of nations and societies. “We have been dealt with like the bird in the cage of a mine. As soon as the bird stopped singing, the miner knew he would need to leave it to safe his life. We are done with being the bird”, David Harris, the AJC Chief Executive Officer, emphasized at the commemoration. What a powerful picture to choose.

As a Lutheran growing up in the safety of a small, closely knit community in Germany, I never had to suffer abuse or prosecution. I had never been excluded due to skin color, religion, or heritage. I can’t grasp, how terrible it might feel having to endure this generation after generation. Or being forced to grapple with the murder of loved ones. But as a German, bearing the weight of my ancestors and my nations crimes, I am committed to stand up against antisemitism, race, and hate. And many others partaking in the commemoration and beyond are as well, emphasizing the common ground of “Loving neighbor and self”. A glimpse of hope in times of trouble.

It is my constant prayer that these signs of hope will develop into a shield against the evil forces of hatred as more and more pull together as they feel their responsibility for peace. Governments and religions. Representatives and individuals.

Surely goodness and mercy shall follow me all the days of my life, and I will dwell in the house of the Lord forever.

May the memory of Mireille Knoll forever be a blessing.

May Europe wake up through her senseless murder before it is too late.