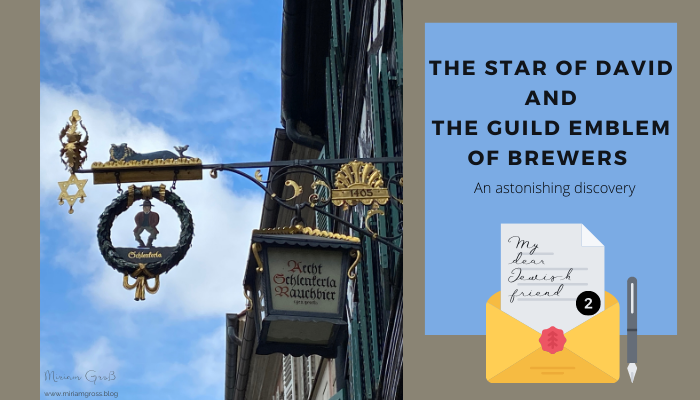 It was a crisp winter day with clear skies and the sun shining bright. A perfect day to stroll through my new home town Bamberg. As my eyes wandered from the old medieval buildings to the beautiful light blue sky my thoughts wandered to you, my dear Jewish friend. The color reminded me of the beautiful New York sky that accompanied us as we walked through our Westchester neighborhood and chatted about our lives, our faith communities, and our shared involvement at your lovely pantry.

As my glance wandered back from the New York colored sky I halted my steps in great astonishment. Right in front of me I could see a golden Star of David at the historic smoke beer brewery „Schlenkerla“. The brewery has a long and old tradition. It was first mentioned in 1387 and is in operation since 1405.

As a Franconias I really enjoy the name „Schlenkerla“. It roughly derives from the English verb „dangling“ or even better „swinging along“. The -la suffix is typical of the East Franconian dialect. The name reportedly comes from a brewer with a gait whose image as it can be seen on the „Aecht Schlenkerla Rauchbier“ bottle. This brewery is run by the Trum family since six generations. A real traditional family business, where tradition and passion for exquisite beers make it a unique place of hospitality.

The symbol displayed on the outside of the historical brewery and tavern is the guild emblem of brewers. This hexagram is the same as the Star of David, which is the most important symbol of Judaism I truly honour and cherish. How could this shared symbolism come about? Matthias Trum outlines in his final thesis at the Technical University Munich that symbol was used for the first time as explicitly Jewish sign in Prague in 1350 on the flag of the Jewish militia and then appears as brewing emblem for the first time in Nürnberg in 1425.

„… the hexagram was in those days in Franconia and northern Bavaria widely used symbol for protection and in this form used by everyone including both jews and brewers . The exiled jews of Nürnberg brought the star with them to Prague, where it became symbol of the jewish community and was then spread all over the world through letterpress. The brewing star remained however in south Germany and developed into a tapping sign.“

My dear Jewish friend, what a fascinating interconnection and shared history of our forbearers! I wished my ancestors would have embraced these shared roots, and as I have discovered, shared symbols instead of committing the crimes of Hitlers Nationalism.

I dream of having a stroll like today with you while the blue Bamberg sky will guide us to the historical tavern and we will have a nice cold beer with delicious Franconian food. On the way home, I am sure we will be swinging like the gait on the „Schlenkerla“.

Love across the miles from your Christian friend.

Ein Gedanke zu “My dear Jewish friend 2: The Star of David and the guild emblem of brewers”